In rural Canada, during a long drought, farmers Marie and Jean struggle to run their small, family-owned business. The recent, profoundly painful loss of their younger son adds to their financial troubles, while their older son, Simon, a restless teenager, is discovering his sexuality. Then tragedy strikes again: Simon dies in a work-related accident and a despairing Marie is left to nurse reopened wounds. When she becomes the object of the attentions of a stranger who witnessed the accident, Simon is left to fend for himself. 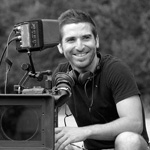 Thirty-year-old, he is born in a family of farmers. He got a degree in screenplay at Université du Québec in Montréal in 2000. At the university, he directed his first shorts which have been presented at New York Independent Film and Video Festival. In 2004 he realised Le pont, first part of the Les affluents trilogy, which is composed also by Les eaux mortes (2006) – presented in tens of festivals including Cannes Short Film Corner – and La battue (2008) – which premiered at the Locarno Film Festival and has been included in Canada Top Ten of the best short films of the year. Marécages is his first feature length film.