English title / Afraid of the dark

In association with / Mtv Italia

Eva – 20 years old, sweet and proud like a nouvelle vague heroine – leaves a factory in Bucharest for the last time. Her contract has not been renewed and she decides the time to leave has come. Her aim is Melfi, a godforsaken town in the South of Italy, famous for its FIAT factory that divides the fields like a scar running between farming and post-industrial civilisations. Having been put up by Anna, a girl of the same age who works at FIAT, Eva starts to follow a group of women, then selects two of them, and, eventually, just one. Eva becomes her shadow, she observes her every movement, she knows her habits and routines. Eva decides to confront her prey in a dramatic face-to-face meeting, a game of cat-and-mouse in which Eva is, at the same time, both pitiless torturer and defenceless victim. Eva and Anna are close, free at last: but if Eva has completed her journey, Anna’s is only just beginning… 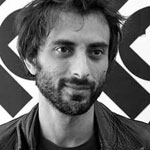 Filmmaker and TV author, Massimo Coppola is partner and editorial manager of the Isbn Edizioni publishing house, founded in Milan in 2004. He realized several art installations; in 2003 Musica per divano preparato has been hosted at Galleria civica di arte contemporanea in Trento and Assab One Gallery in Milan. He created, wrote and hosted several TV shows like Brand:New (Mtv), Avere vent’anni (Mtv), Cocktail d’amore (Raidue), Pavlov (Mtv), and directed the documentaries La regola del contemporaneamente (2002), Solomon (2006), Politica zero (2006), in competition at the Turin Film Festival, Bianciardi! (2002), presented at the Venice Film Festival within the Venice Days, and Parafernalia (2008), selected at the Locarno Film Festival.