Thessaloniki. Stergios, a shady and tormented guy, turns 27. His mother Gena stays at home consumed by her solitude; his brother Thanos, back home after many years, is trapped with Uncle Antonis in a traffic jam in Athens, caused by a demonstration against the economic crisis that is affecting the whole country; his uncle Nikitas is on his way to lecture at the university; his aunt Stella, who brought him up, teaches literature to children; his cousin Anna reaches the TV studio where she works. In the space of an apparently normal day, Stergios and his relatives come to terms with their private past, dealing with the history of Greece of the last 30 years. 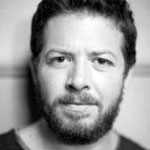 Born in Thessaloniki in 1978, Syllas Tzoumèrkas studied theatre, acting, and cinema direction at the University of Athens, at the Stavrakos Hellenic Cinema and Television School, at the Instituut Media en Re/presentatie of Utrecht University and in New York. He has directed shows and episodes of TV series. His first short film, Ta matia pou trone (The Devouring Eyes, 2000), was in competition at the Cinéfondation (Cannes Film Festival) in 2001 and won the Jury Award at Karlovy Vary Film Festival; his second short, Vrochi (Rain, 2002), won the Short Film State Award.