Bari, a city caught in the relentless economic crisis. Ivo is an agronomist, but the lack of opportunities pushes him to accept a job in the fertile region of Banat in Romania. Clara has just ended a relationship and is about to lose her job at the Bari harbor. Ivo and Clara meet by chance and seem to immediately understand each other. They spend only one night together before Ivo’s departure, but that is enough to create a bond and wanting to meet again. When Clara visit him in Romania, they fall in love. But is exile their only way to happiness? 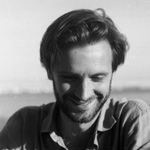 Adriano Valerio, after completing his BA in Law at the Università Statale in Milan and attending Marco Bellocchio’s film workshop, moved to France. He teaches Film Analysis at the International Film School of Paris. Moreover, he collaborates with the Académie Libanaise des Beaux Arts of Beirut, the Istituto Marangoni and the Italian Cultural Institute of Paris. In 2012 he founded the Camera Mundi association, which organizes film workshops in developing countries. In the same year, he attended the Berlinale Talent Campus and the Locarno Film Academy. His short 37°4S won a Special Mention at the Cannes Film Festival (2013) and the David di Donatello Award for Best Italian Short (2014). Banat is his first full-length film.