Nesrin, an urban middle class woman recovering from a divorce, goes back to her deceased grandmother’​s​ old village in Anatolia to finish a novel and live out her dream of being a writer. When her conservative mother turns up uninvited and refuses to leave, Nesrin’s writing stalls and her fantasies of village life turn bitter. The two women are forced to confront the darker corners of each other’s inner worlds. 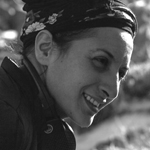 Born in Ankara in 1980, holds a degree in cinema from the Mimar Sinan Fine Arts Academy of Istanbul. Her short Unus Mundus (2007) won the Turkish Film Critics Association’s Best Short Award in 2009. The same year, her short Süt ve Çikolata (2008, Milk and Chocolate) was nominated for the same prize. She also worked as an editor, cinematographer and producer. Ana Yurdu (Motherland) is her first full-length film.