We are in the year 2001, a temporary ceasefire brings a much-needed break to a small war-torn village in Northern Nepal, bringing much joy among the residents. Prakash and Kiran, two young close friends, are also starting to feel the change in the air. Though they are divided by caste and social creed, they remain inseparable, and start raising a hen given to Prakash by his sister, with hopes to save money by selling her eggs. However, the hen goes missing. To find it, they embark on a journey, innocently unaware of the tyranny brought by the fragile ceasefire. 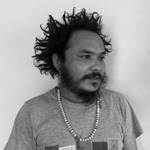 Is a young emerging director graduated in Nepali Literature and Filmmaking with a post-graduate degree in Buddhist Philosophy and Political Science. His short film Bansulli (The Flute, 2012) became a historical achievement being the first time a Nepali film was ever selected at the Venice International Film Festival and won a Jury Award at the Toronto Nepali Film Festival. He participated in the Berlinale Talent Campus and attended the Asian Film Academy in the Busan International Film Festival in 2013 where he was awarded The Outstanding Fellow Award. Kalo Pothi is his debut film and the first Nepali long-feature film presented in Venice.