A town devastated by an earthquake is the set chosen by a troupe to shoot a film about Greek statesman Pericles and his “Epitaph”; a manifesto about the concept of democracy. However, a bureaucratic fate decides otherwise and the town square must be defended. A story about uncivil coexistence, about the primacy of the image and about a bunch of ruins that, by becoming a symbol, remain ruins. 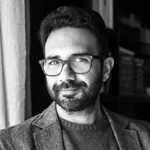 Leandro Picarella (1984) graduated from the Centro Sperimentale di Cinematografia in Palermo and continued his education between Palermo and Florence, specializing in Italian cinema and theatre. Between 2010 and 2014 he wrote and directed his first short films and documentaries. In 2015, he directed Triokala, awarded in several film festivals in Italy and abroad. In recent times, he started combining his directing with teaching, working as a tutor and external collaborator in several schools and at the Centro Sperimentale di Cinematografia. He is cofounder of Qoomoon, a production company born in Sicily in 2017.