One day, Pasquale decides to change his name and to be called Tony. Because despite being born in Bari in the mid 60s, he crosses the ocean with his family at 9 years of age and grows up as a real American. He becomes a taxi driver in Yuma, but he is arrested due to his “side job”: carrying illegal immigrants to the US through the Mexican border. He is therefore forced to choose: jail in Arizona or deportation to Italy. Once back in the region of Puglia, he finds himself living alone in a cave in Polignano a Mare, looking at Italy as a small, stuck country, with no opportunities and without dreams. But Tony is not willing to surrender… 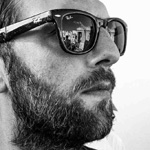 Ascanio Petrini (1979) was born in Bari. A DAMS graduate, he directed a few short films, among which Piscio, presented at Cortodorico and among the finalists of Nie Wiem. His first documentary Salva la cozza was selected at Sguardi Altrove Film Festival in Milan, and RIFF in Rome. He has been working as a first assistant director on several Italian and international films. Tony Driver is his debut feature.