An aristocratic family faces bankruptcy. Little Fosca has to take care of her family that rejects her. One day she stumbles upon the studio her dead mother, a talented taxidermist. Here she comes up with an idea: in order to be loved, she has to become like her mother. 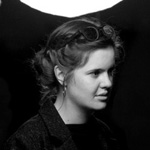 Maria Chiara Venturini (1992) after finishing her studies at the John Kavardash Academy she moved to San Francisco where she graduated in Motion Picture and Television at the Academy of Art University. She directed the short films, Chanel-Ancient Regime, Say Yes Dog: Girlfriend and Fosca.