Metropia is an animated movie sets in a near future. The global energetic crisis has induced the creation of a huge European subway network. Roger, employee of a call centre in Stockholm, goes into a station and there he hears strange voices in his mind, just before encountering a fascinating and mysterious woman, Nina, and he decides to follow her. She helps him to escape from this subway “disorders”, but Roger, little by little, is more and more involved in an obscure conspiracy. 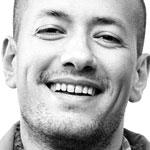 Tarik Saleh was born in Stockholm in 1972, and when he was still young he made his way among the Graffiti artists. His murals are still visible in the western periphery of the Swedish capital city. He co-directed with Erik Gandini the documentaries Sacrificio – Who Betrayed Che Guevara? (2001) and Gitmo – New Rules of War (2005). Therefore he scripted and produced two TV series for the Svt Swedish Television. He’s one of the founders of Atmo Media Network. Metropia is his debut fiction feature.