Ibrahim walks through the streets of Teheran begging with a newborn baby. He says he’s a widower, but he is waiting for his pregnant wife to join him; in the meanwhile he shares a room with two friends, Fatah and Madjid. Victims of a trick, the three men try to solve the problem looking for the thief and trying to make money, getting in contact more and more with dodgy affairs, in a crescendo of situations and with an unforeseen epilogue. 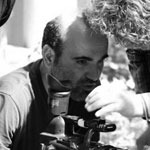 Nader T. Homayoun was born in Paris in 1968 and went to Iran for the first time during the years of the Islamic revolution. In 1993 he passed the test for the admission at the direction department at FEMIS in Paris, and then he decides to live in France. Already selected at the Venice Film Festival for his short film C’est pour bientôt (2000), in 2005 he directed the documentary Iran, une revolution cinématographique, an history of Iran told through its cinema, presented at several international film festival.