An old widower lives in a tumbledown house with his second young wife. The village where he lives was hard hit by the earthquake. In order to earn a living, the man, who is a mechanic, finds out an ingenious system. Not far from his house he digs a deep pothole in the road, and then waits for the cars to fall inside. The road is not well-travelled, but the few travellers fall in the trap, so they need the help of the old man. But one day, a politician decides to repair the pothole… 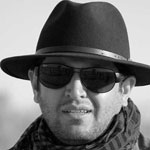 Ali Karim was born in Teheran in 1977, and enters in the Iranian film circuit in 2000. In the summer 2006 he attended a workshop with Abbas Kiarostami where he directed two short films, Yellow, Blue, Red and The Elevator, selected for several international film festival. The Pothole is his debut feature.