Alzbeta and Martina are two sisters emigrated to Ireland. When Alzbeta decides to go to live at Ducky’s house, a drifter known by chance, Martina, in a relationship with an Irish, tries to help her not to get into troubles. But Alzbeta cannot help clashing with her sister because of a tragic event that in their past has involved both of them. 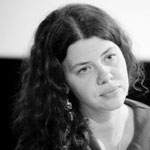 Mira Fornay was born in Czechoslovakia in 1977, and in 1997 began to study at the Famu Academy in Prague. Then she stayed on at studies at the National Film and Television School in England, where she graduated in 2004 with the short film Alzbeta. In 2004 she attended a workshop with Abbas Kiarostami. Her short films were selected and awarded at several international film festival. Foxes is her debut feauture.