Production / Dodo Fiori for DNA Cinematografica, in collaboration with RaiCinema

Aman, a 20 year-old Somali boy who grew up in Rome, works in a second-hand car store. Since he suffers from insomnia, during the night he is used to cruise through the Esquiline Hill streets, between the Termini Railway Station and Vittorio Emanuele Square. One of those nights, he secretly goes up to the balcony of an apartment building, and there he meets Terry, a 40 years old ex boxer with an obscure past. The two become friends and little by little this friendship turns into a strongly ambiguous relation. Terry uses the boy for his own purpose, but Aman, in turn, foresees in this relation a chance of social redemption. 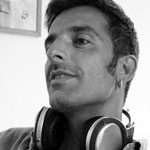 Claudio Noce was born in Rome in 1975. He started working as assistant director for films, commercials and video clips at a very young age. In 2003 he directed the short film Gas starring Elio Germano. His next work Aria won the Silver Ribbon and the David of Donatello Awards for the best short film of the year. With the documentary Aman e gli altri (2006) he participated at the Turin Film Festival and with the short film Adil e Yusuf at 64. Venice Film Festival.