On Christmas Eve in Seoul, a young teacher is left by his lover. Cruising through the city with a gift that the young daughter of the woman gave him, he meets one of his colleague who teaches in the school attended by the girl, and then he enters a bookshop, drinks a coffee while sitting beside an unknown woman. In the second part of the movie, the same man accepts to listen the love troubles of a girl met by chance, promising not to fall in love with her, but just accompany her and love her brotherly. But, after four nights of enchanting intimacy along the river and in the cafés of the city unexpectedly her lover returns. 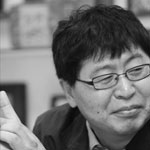 Jung Sung-il was born in Seoul in 1959. A well-known film critics, between 1989 and 1999 was the editor in chief of two main specialized review in Korea, Road Show and Kino. He co-ordinated the workshop with Jia Zhangke at the Korean Film Academy in 2000 and in 2007 and with Hou Hsiao-hsien at the Pusan International Film Festival in 2005, and the Seoul Film Collection in 2006.