Pierre is a 17 years old teenager enmeshed by the intellectual charm of his aunt Nadia, whose addiction to alcohol is undermining her health. Their exclusive and ambiguous relation is regulated by times, walks and habits that are always the same, but it gradually undergoes the sentimental repercussions coming from the external world, which induce them to part and then meet again after a period of time, but with no chance to re-establish their lost conjunction of minds. 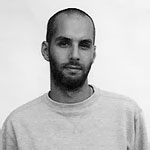 Patric Chiha, 34, of Austrian origin, lives in Paris since 2001. Director, scriptwriter, cinematographer, editor, sound designer, he has collaborated with Vincent Dieutre for Bologna centrale and Mon voyage d’hiver in 2003 as well as for Ea2 in 2008. He directed the short films Casa Ugalde, Le Jardin and Où se trouve le chef de la prison?, the medium-length feature Home and the documentary Les messieurs.